Are you worried about the future of your industry or career?

Are you already being made redundant?

And working from literally anywhere in the world you choose to? e.g. from home or from holiday?

I know this might sound too good to be true, but I’m a living example that this is more than possible. 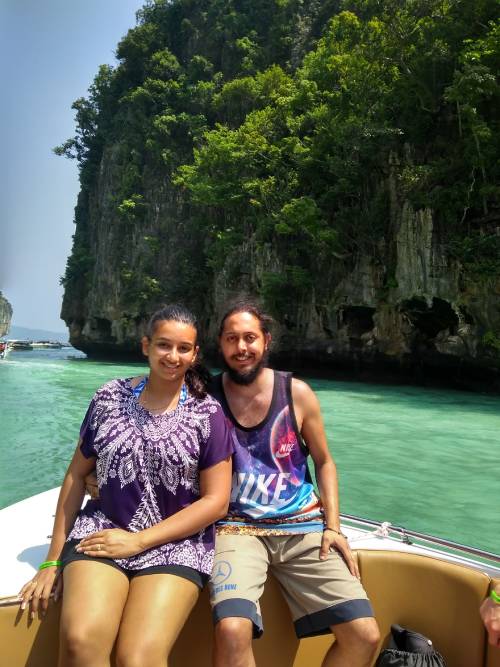 Also, some of my students are happily earning these sorts of figures, and living a much more balanced life than many of us would dream is possible.

I’ve too been disheartened and wasted a lot of money buying courses out there claiming to bring you success and a fantastic lifestyle if you start X Y Z business - only to discover they were only telling lies.

I shockingly actually found most people out there who teach you to start businesses are themselves struggling to make ends meet!

So I decided to ditch all the so called ‘business gurus’ and find my own path.

I actually found the easiest way to make money is to get a well-paid job with a company instead of trying to start your own business.

Don’t get me wrong - there’s nothing wrong in trying to start a business - but here are the statistics:

Unfortunately the statistics always win, no one has ever escaped them.

If you think you can beat them, and be the 30% that succeeds, hats off to you and I honestly wish you well with it.

However, personally I like to have better odds than just 70 / 30.

So again, this is why I’ve concluded the easiest way to make money is to get a well-paid job with a company instead of trying to start your own business.

What I found though was that different industries offer hugely difficult levels of financial compensation.

And also vary massively on the level of work flexibility they offer i.e. the hours you must work and the place you must work from.

Luckily, I had always loved building websites (totally self-taught by watching YouTube videos), and decided to take a punt at getting a job as a web developer.

My bet paid off! And I managed to secure my first web developer role at £36,500 working in a fashion startup.

Not bad for someone with zero commercial experience and only basic website skills / knowledge! (And I should mention, I also had NO formal qualifications of any kind in this field).

However, I was still stuck in an office developing websites, working 9 - 5 and earning what I considered to be very little money for the types of savings and investments I really wanted to make.

I also badly still wanted more work flexibility i.e. choosing where I want to work from and the hours of my work.

One day I made a decision that I would only work to live, never live to work.

I tried a few different things and 2 years on I was now earning over six figures, that’s £104,000 per year. Much better on the financial side!

But also, I was able to find work that allowed me to work from home 2 - 3 days a week and some roles I secured were actually 100% remote from wherever I wanted.

Not doing too shabby here - I’m sure you’ll agree?

Now I genuinely feel bad for others that don’t have what I have in terms of earnings and flexibility.

Especially on the flexibility side, I’ve seen plenty of examples where working mothers are not getting enough time to spend with their kids.

Couples that don’t get to spend enough quality time with each other.

Parents that don’t get to spend enough quality time with their children. 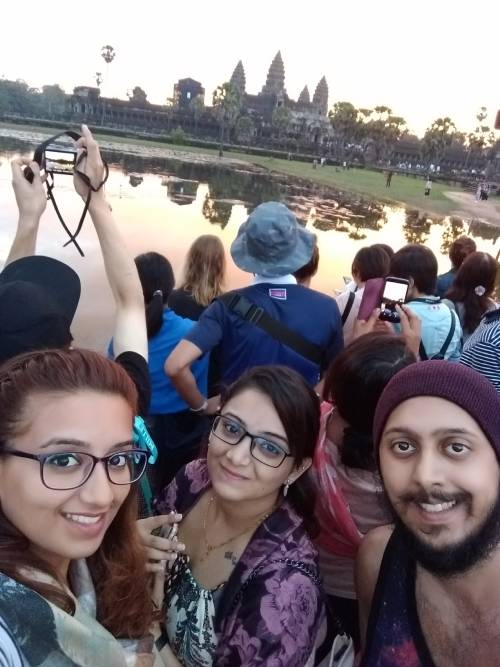 If it were up to me I would rid the world of the following:

The idea you need to commute for an hour in a stuffy train or bus, or be stuck in traffic on the road to work

The idea you need to go to an office or a place of work in order to do your job.

WHY??? Why on Earth with all the technology available today, do you have to go into an office or specific place of work?

(An office that usually has bad central heating and/or air conditioning, office politics, some faces you’d rather not see…etc)?

You should be able to work anytime you want, from anywhere in the world you want, and your employer should just be happy that you’re producing results for them.

So as you can probably see, I strongly believe remote working is the way of the future. And it should be.

However, we don’t live in a perfect world. Unfortunately a lot of industries require you to go into a place of work as you can’t do the job from home e.g. teaching, health care, legal, financial / banking, security, armed forces…etc.

So if you’re already trained in one of these areas, I’ve got some bad news for you, you’re going to need to retrain yourself sooner or later in a technology-based career.

So if you really want better earning with more flexibility I would urge you to strongly re-consider your industry and career, and look for a job within the technology field.

Recently I saw this article on LinkedIn which I encourage you to read too regarding the rise of high paid yet flexible jobs: 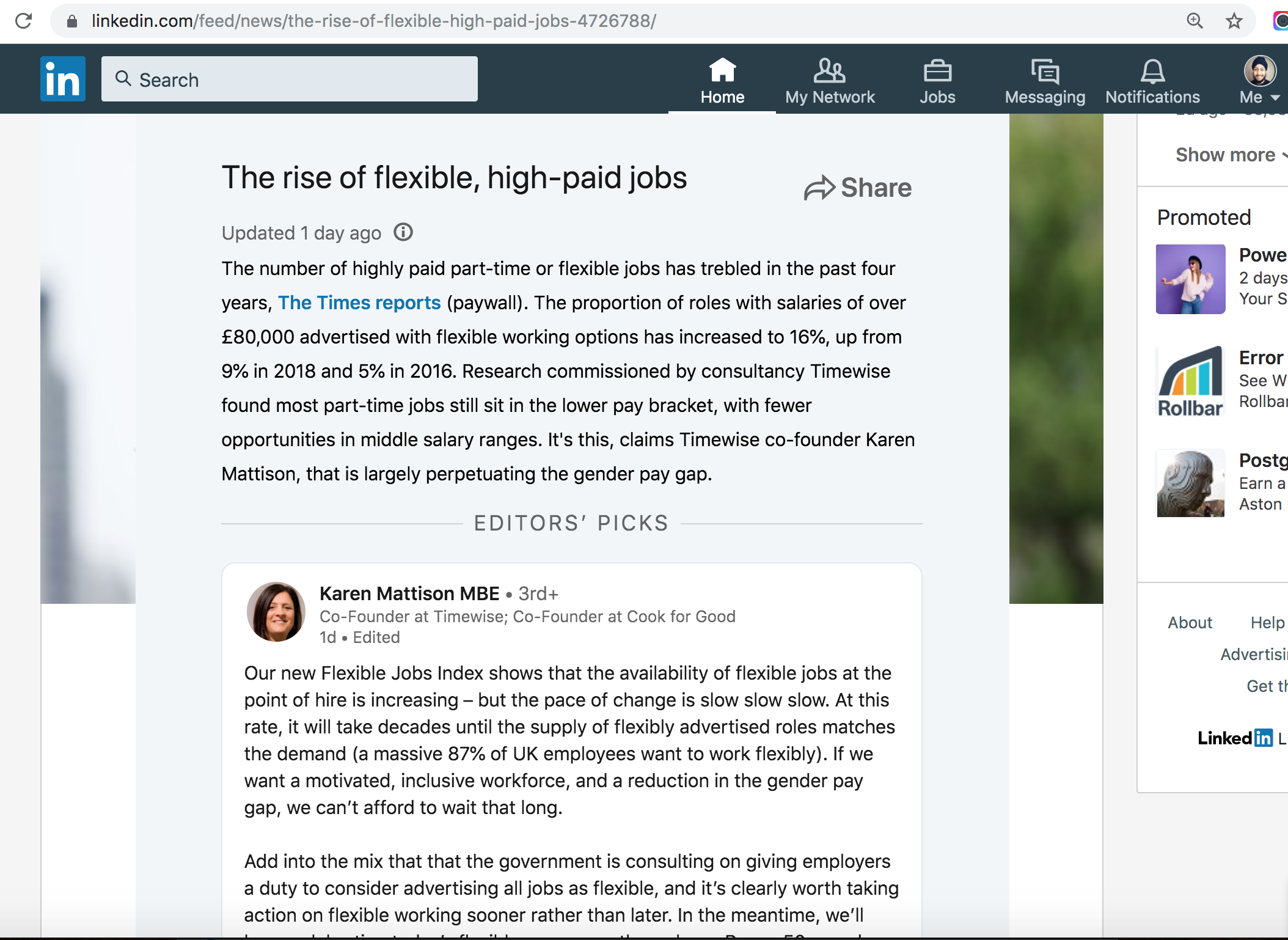 And honestly the best role to start with is a web developer role, just because it’s easy to learn and doesn’t require any formal certification.

Here is a graph of how much web developers (front-end developers) are earning today: 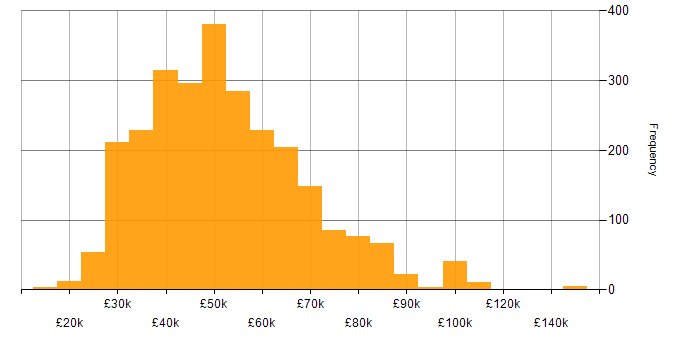 And also this graph shows how this role of web developer (front-end developer) has been growing like crazy in demand year on year: 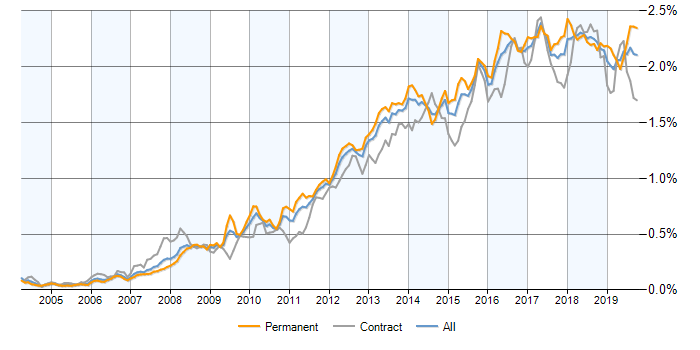 Also take a look at some of these recent LinkedIn posts coming up on my news feed regarding the salaries & benefits being offered to web developers: 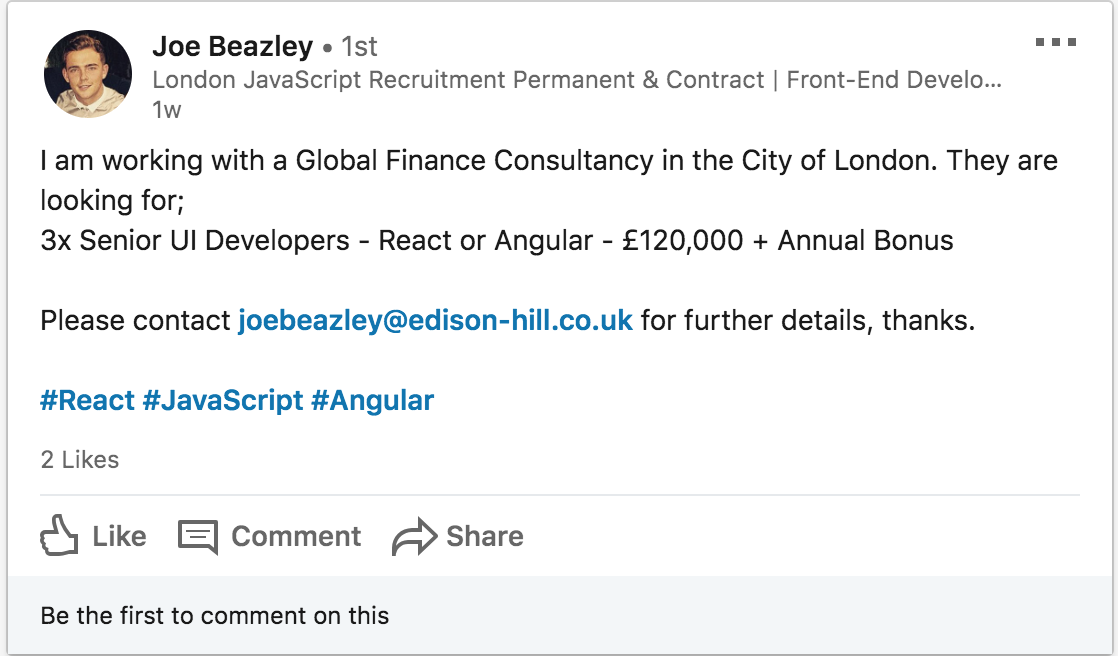 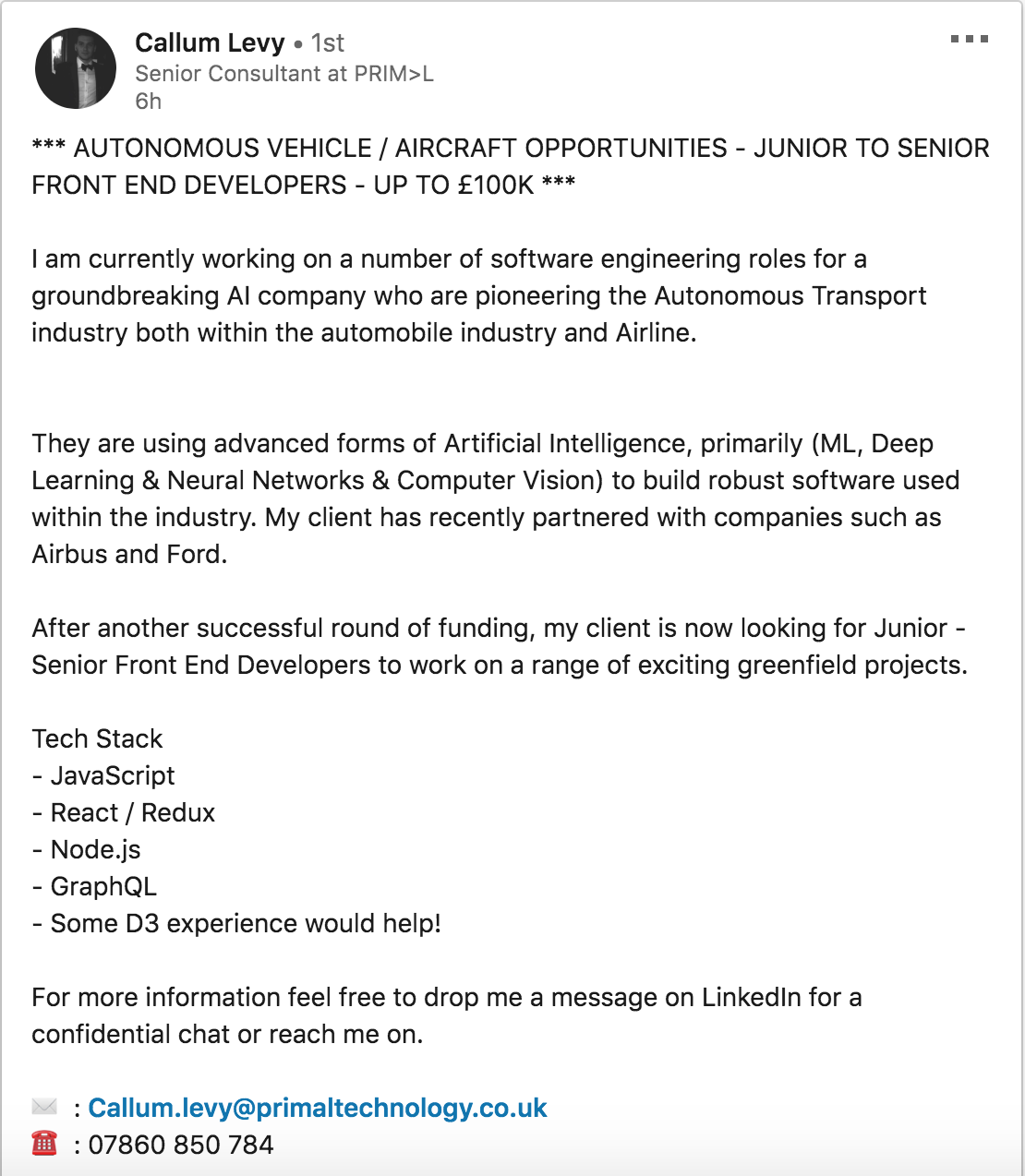 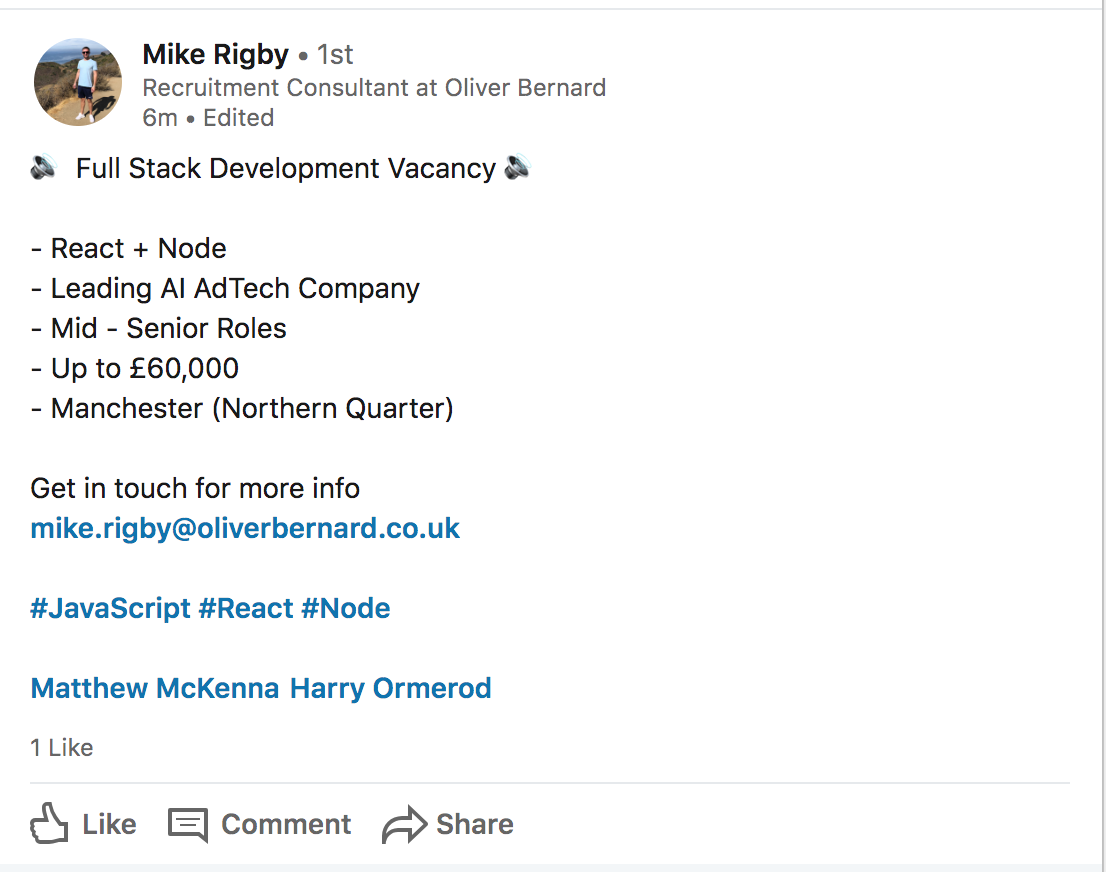 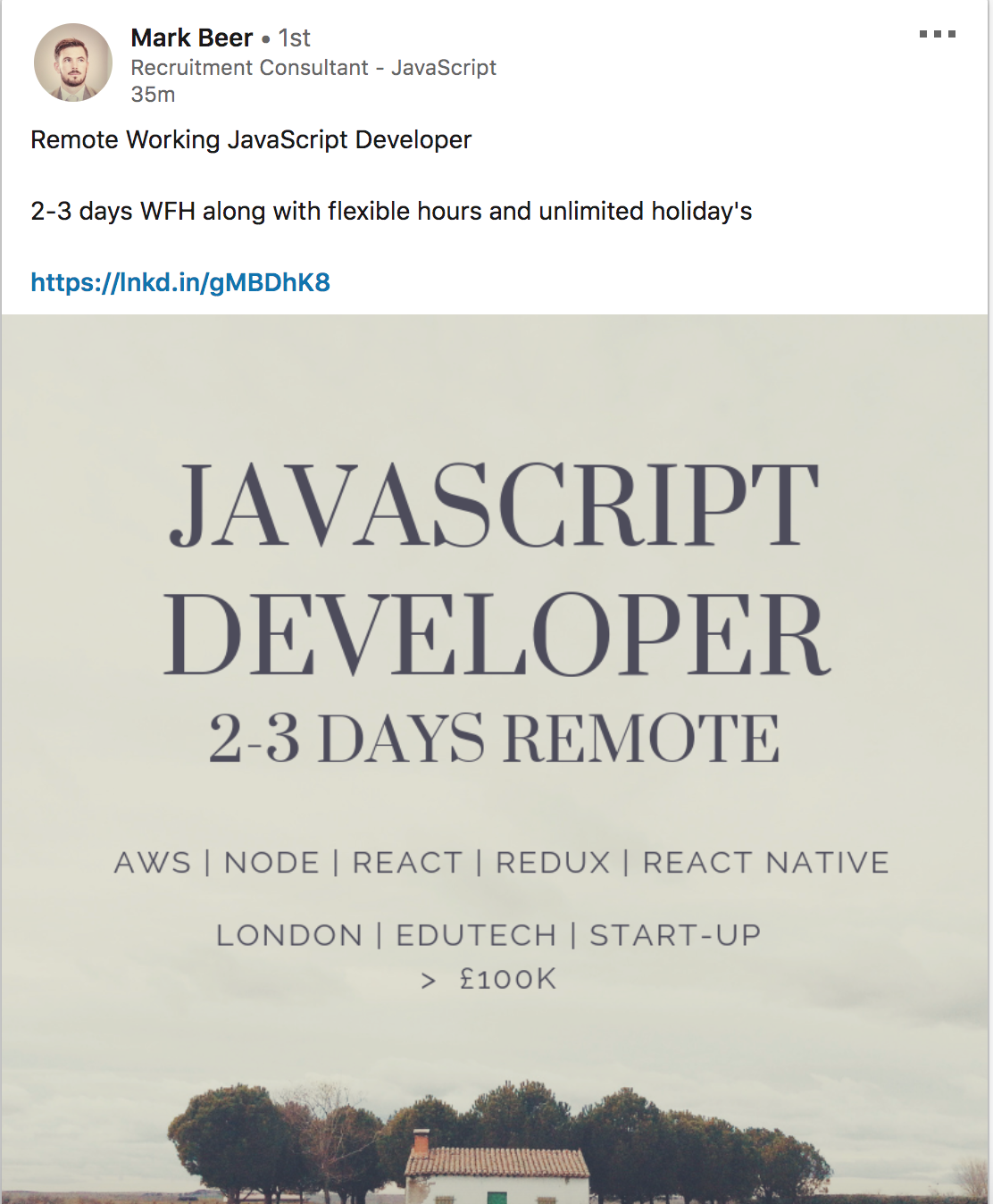 I even had this email come through recently, with a crazy offer!

In summary, you should seriously consider re-training as a web developer.

But to make matters worse, a lot of the web design training providers out there teach it in the most complex way - usually overwhelming you with information you don’t need to know and would never use.

Also, they just tend to teach you the web development part and then leave you to find a job on your own.

And even if they do help you to find you a job, they would never teach you how to earn the top-end of the salary. Probably because they don’t know themselves how to.

Also, they would never encourage you to live your life to the fullest or teach you the techniques of how to push for more and more work flexibility. Again, probably because they don’t know themselves how to.

Hell, there’s many website developers and programmers I work with everyday who still earn very little and don’t know how to haggle for a better salary and more work flexibility even though they have been developers for over 10 - 20 years! And even though this has now become quite common in the industry!

Sometimes it baffles me. It’s a shame. It’s a real shame to see.

But it doesn’t have to be this way.

I’ve figured all this out for you already so you don’t have to stress yourself about it.

Save yourself 10 years of time, money and effort and join me on a live training if you want to take things further.

If you don’t, and you’re happy where you are, that’s cool too. I hope you learnt something and leave this website better off than you were before.

If you are still reading though and still interested, I teach things in a simple way so whether you’re 8 or 80 years old, you should be able to follow it easily.

Also I focus on only teaching you things you’ll need for getting a job in this field earning the top-end salary, and no more. So you don’t feel overwhelmed and can get a new job quickly too.

I’m 100% invested in seeing that you’re successful because I want to see you make the transition to a more secure future in technology easily and quickly.

You’ll also get some insider secrets of how I earned up to £100,000/year in just 2 years. This would be a rapid timescale for any career, let alone a brand new one!

I’m holding nothing back in this brand new free online training.

So sign up and change your life for the better 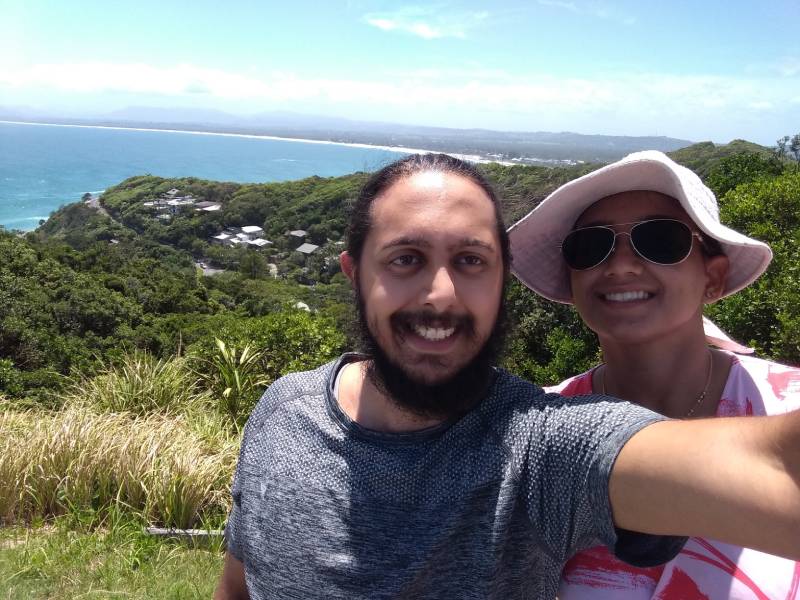